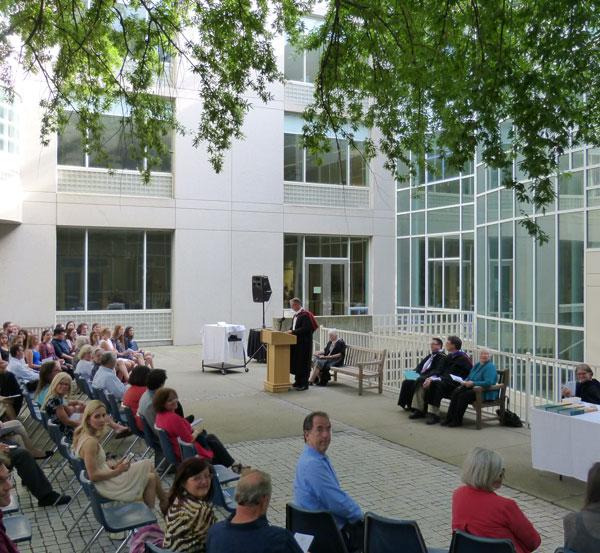 Each spring something peculiar happens to universities. Most of the time, our websites and press releases will tell you that we are at the forefront of knowledge, fostering new discoveries and pressing forward human understandings in fields of which our parents could only have dreamed. This is all true, in my view: universities are looking always to the future and indeed helping to create it.

And yet in the spring these forward-looking institutions, the universities, erupt in antique symbols. Most of the year it’s only the classicists who speak in dead languages (barring the odd biologist citing a classification for genus and species) but come spring you will hear physicists and geneticists murmuring in Greek and Latin the mottoes of higher learning: veritas; lux et veritas; vox clamantis, fiat lux. And scholars of all disciplines don the garb of medieval monks.

We do these things to remind ourselves of our medieval predecessors who kept classical learning alive through the Dark Ages - who looked to the future by conserving the past, so that the wisdom of humanity would be protected from the violence of men. In the universities of Bologna, of Paris, of Oxford the knowledge of the ages was preserved and expanded behind fortified walls, so that the accumulated understanding of their time would not fall to the sack of armies as had the library of Alexandria.

Perhaps that history seems distant and quaint to us today, here on the open and friendly and not especially medieval or fortified campus of UC Davis. But it’s worth remembering we gather this afternoon in the shelter of library walls built by the administration of Franklin Roosevelt when the United States was defending itself against the threat of a modern dark age posed by fascists. UC Davis went on a war footing, and the library is a part of its fortifications. When the Nazis built airplanes and tanks to conquer the free world, the Americans built airplanes and tanks to defend it: but while the Nazis burned books, the Americans built libraries like this one.  Even here, we are a living part of that tradition begun in the middle ages.

Likewise at commencement in the coming weeks you will see the officers of the university solemnly bearing a ceremonial version of the mace, in memory of the weapon preferred by the stoutest medieval lords in defense of their lands, only these officials carry it in defense of ideas.

These symbols are the things we carry as we send you out into the world.

This ceremony is akin to those in spirit, but instead of a mace we carry a key. The symbol of the society, the key bears on the obverse the letters Phi Beta Kappa, which stand for the Greek motto Philosophia Biou Kubernetes, or “love of learning is the guide of life”. The key also features three stars, which are said to stand for various virtues, usually friendship, morality, and learning, and a pointing finger, for aspiration to those stars. On the reverse we find the script letters SP, for the Societas Philosophiae, or a society dedicated to the love of knowledge, and the date December 5, 1776—the date of the society’s founding, only a few months after the founding of the American Republic itself.

None of that makes it a key; it's the small oblong post that makes it a key, though it doesn’t look like any key you’ve ever seen, I expect. That’s because it’s a pocket-watch-winding key; older pocket watches had a mechanism that had to be wound with a key. As pocket watches became more modern, the key was replaced with a winding stem. By the early twentieth century, most people carrying time pieces had abandoned pocket watches for wrist watches. And of course now many, if not most, people have abandoned wrist watches, depending instead on their cell phones to tell time.

So the key is a key to a lock that is not only obsolete but out of date several times over. But that is all right; the mace is likewise obsolete. It’s the symbol that matters.

This key is in its form the key to a literal spring - the mainspring of a watch. But in its symbolism, in its meaning it is one with the other symbols of this season of spring, of this time of year when we honor you for the depth and breadth of your study and welcome you into the long tradition of this and all universities, so you can be said, whether you are scientists, humanists, artists, social scientists or any other kind of scholar, to carry forward this tradition of the liberal arts. We ask you to remember that the root of "liberal" is the Latin liber, for "free," as in the freedom of the mind and spirit which universities are pledged to defend and carry forward.

We have vouchsafed to you this key as token and earnest of your love of knowledge and ours, to recognize you as heirs to a long tradition of protecting and furthering the scope of human understanding. We hope you will receive it proudly and carry it forward to greet this spring.